My first clinical placement in an acute care hospital setting had the obvious nerves and doubts running through my mind. Having never worked in a hospital before, I was unsure whether I could perform the necessary skills, especially injections and preparing medication solutions to deliver through IV lines. We haven’t had to do venipuncture yet, so that will be another doubt to cross in the near future. The communication aspect of the role does not trouble me though – I do enjoy interacting with people, especially when I can help them feel better about themselves or the situation that they have found themselves in.

My communication skills would be immediately tested though, when I first encountered a patient who had recently been told he had from three weeks to three months to live. It seemed all he heard was the three weeks part of that statement and he wanted to die. He was of sound mind and he was in pain. He initially looked scared and I can understand that – how do you process such a statement? We’re all guilty of wishing time away when we’re doing something we don’t necessarily like but what would go through your mind when someone tells you that your time left is so short? I watched as he seemingly went through phases – from the initial scare to the occasional cheeky smile and smart remark as we tried to lighten the mood for him, to the times when I just had to silently stand there and be with him.

One afternoon as I was walking down the hall of the ward, I noticed he was attempting to get out of bed, but wasn’t getting very far. By this stage, his pain had reached a level where the basic effort of moving his body was too much, but he was still determined to try. I walked into his room and asked what he was trying to do. “I need to piss”. He was clutching onto the side rails of the bed, trying to lift his frail body up. In this moment, I knew he probably shouldn’t have been trying to get out of bed, but his determination to move seemed more important. So, I lowered the bed and offered my hand to help him get up. It took some time and I could see how hard it was for him, but none of that mattered in this moment. He needed to do this. He needed to show that he was still capable of something, even if it was just the act of getting out of bed.

After the initial struggle of helping him out of bed, the next challenge was getting to the toilet. Yes, he could have just went in his bottle, but he didn’t want that. All I was thinking at this time was to maintain his dignity and independence, even though he couldn’t move without some support there. I held his right arm to prop him up as he slowly shuffled a few centimetres with each thrust. He kept apologising and I kept telling him he had nothing to apologise for. I was here to help him and we had all the time in the world (this won’t always be possible in the world of nursing, but I sure hope I’ll be able to be present whenever the need is there without having to rush off to the next patient).

We eventually reached the toilet and his pyjama pants had already fallen enough that he didn’t need to lower them. He was losing weight, which was another frustration for him. He started to go and mostly missed the bowl. Again, he apologised and sounded upset. Again, I reassured him that he had nothing to apologise for. I stood behind him, still holding onto his side. It sounded like it was a real effort to pee, but he managed to get a little out. He just stood there for what seemed a long pause as I continued to hold his side. “Well done mate, do you want to make your way back to bed?” He nodded and we started the slow shuffle back, with each move causing visible pain.

As we reached his bed, he slowly lowered himself onto the edge and sat there. I thought it was a good idea for him to sit up for a bit since he’d made the effort to get up. As he was sitting there, I asked if there was anything I could do: “get a knife”. He looked at me and his eyes were telling me he was serious. I have been a strong advocate of voluntary euthanasia laws for as long as I’ve been aware of the issue (I did my year 12 english essay on the topic, which shows how long this issue has been going here). This moment will sit with me as proof of when these laws should be acted upon. He was of sound mind, in immense pain, and he had had enough. He was losing his dignity and quality of life. I told him I would do as much as I could, but that I couldn’t do what he wanted. I said we were trying to make this time as comfortable for him as possible, but he replied “if I was a dog, I’d be put down already”. I couldn’t argue with that. Thankfully, Victoria will be legalising voluntary euthanasia as of mid-2019 with some of the most conservative laws in the world, but that didn’t help him in this moment.

Later that night, he was in bed and looked uncomfortable as I passed his room. I walked in and asked how he was: “shit, mate”. By this stage, he had been started on morphine for the pain, but it hadn’t taken effect yet. I walked up to his side and took his hand. With the little strength he had, he held my hand back and I just stood there. I didn’t say a word, I just held his hand and looked at him. I knew there wasn’t much else I could do, and all those times I’d been told of how communication is more about the non-verbal than the verbal came into my mind and rang true. I thought about my lecturer’s remark, of the privilege to be present at the end of a life, and that also rang true. And I continued to just stand there and hold his hand. 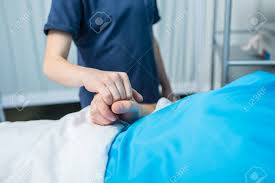 That was the last time I saw him. It was a Thursday night and my shifts meant that I wasn’t back in the ward until Tuesday morning. This is when I learned of his passing on the Sunday. It was bittersweet – I knew he wanted to go, but I was still sad that I wasn’t there. This will be a continual lesson for me to know that I won’t always be there at the end, but as long as I’m present when I can be, I will take that. It is indeed a privilege to be in this position and it is a privilege I hope to never forget, or take for granted. RIP dear man.

4 thoughts on “The Privilege”